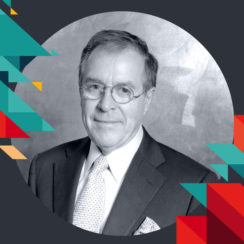 Schulze began his discussion with support of a simple, yet profound idea: That there is a no more noble profession than management. He explained that managers have the opportunity to give input to human beings and help them grow professionally and personally. And that if management is refined to its highest iteration, you’re really no longer talking about management at all—You’re really talking about leadership and that’s a huge difference.

Schulze went on to share some of the revelations that occurred over the course of his career that led him to his current passion on what makes a truly effective leader. Over the years spent reviewing restaurants and hotels around the globe, Schulze began to notice a pattern and cited two specific examples to illustrate his point: He visited one hotel in a U.S. city that struggled with the lack of a service culture and a negative attitude within the labor force. “I asked the local management,” said Schulze. “‘Where will the hotel be a year from now and what are you trying to accomplish? The answers were excuses such as, ‘If I only had a bigger ballroom, or if my restaurant was not on the second floor but had a street entrance, etc. Instead of a vision, he had already a reason for what he could not accomplish.”

“I visited another hotel in another city that is very similar to the first. The hotel was even built by the same architect.

This hotel also lacked a service culture, but you know what that manager’s response to this was? It was, ‘That’s good because we can train them our way, and a year from now they will be proud of this hotel. The first manager was very good in process, but he had no vision that he could take to his people. The second manager was a true leader, as he had a destination and vision with which to lead.”

Schulze was careful to clarify that these ideas of destination and vision extend beyond the traditional and highly-overused concepts and should take on a true mission of purpose for an organization. And that they’re supported by another overused concept that is still critically essential to take each step on the journey towards the destination and vision: Alignment. The vision of the organization needs to align with the expectation of the customer, and this vision needs to align to the point that everyone in the organization knows where they going and how they’re going to get there.

Schulze explained that for alignment to be successful, each of us must understand how to relate to the people around us—and how not to.  Most managers currently give orders and direction, but throughout history, human beings have struggled to relate in this way. But when issues are defined in terms of objective and motive, everyone can align around a common purpose.

A focus on alignment needs to happen from the very first moment an employee has contact with the organization. Schulze cited the need to hire people not to fulfill a function, but to hire someone to join the company in its mission. While a functional requirement will still need to be met, that function is desirable only in its role to achieve the vision—and that’s where the real value lies.

In three years spent reviewing over 60 managers across 60 hotels, Schulze shared that he found only five true leaders that didn’t make excuses and would focus on aligning their teams with the objectives of the company.

It shows just how rare it is to find exceptional leaders, but Schulze spent the rest of the session, along with John Maxwell, breaking down the qualities of effective leaders and sharing stories on how these qualities led to significant achievements in the real-world.