Leadership stories from the trenches with Ralph de la Vega 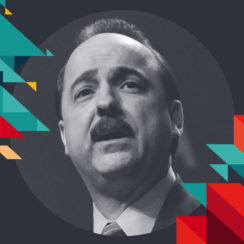 Ralph de la Vega has a personal story few can match. His life started as a child fleeing from Fidel Castro’s Cuba, and ultimately led to key leadership positions at telecommunications giants such as AT&T and Cingular Wireless. Ralph has been no stranger to adversity throughout his career, holding the presidency of BellSouth Latin America during one of the worst recent periods of political upheaval in the region, and later leading Cingular Wireless and AT&T through the largest telecommunications merger in U.S. history. It’s why we were so proud to have had Ralph as our guest speaker for the March edition of the Executive Circle roundtable discussion.

Ralph shared his leadership journey through three distinct events that forged his vision of what defines effective leadership.

The first story comprised some of the early events in Ralph’s life as he immigrated from his native Cuba to the United States. Ralph was only 10 years old when his family tried to flee Cuba for the prosperity and freedom of the U.S. “The militia man that looked at our exit papers said five words that changed my life, and my family’s life forever, and those five words were:  ‘Only the boy can go.’”

With his family’s encouragement, Ralph came to the U.S. to stay with a new family and no resources. He would not see his own family again for another 4 years. Ralph shared his philosophy on this pivotal moment in his life stating, “I believe that it really doesn’t matter where you start out in life, what really matters is where you end up and how you deal with the adversities that you will face along the way. It is with those adversities and how one deals with them that, in my opinion, defines the character of a person.”

Faith in a better future

As he grew up in this U.S., Ralph soon faced another turning point in his life when his school guidance counselor advised him to give up his dreams of becoming an engineer. But his grandmother, who recently immigrated into the country, had other ideas. “I’ve said this to every group I have spoken to,” Ralph explained. “She told me, ‘Ralph, don’t let anybody put limitations on what you can achieve.’”

Ralph went on to get his engineering degree and take with him a key lesson learned from his grandmother: Faith in a better future is a key enabler to overcoming incredible odds and seizing opportunities.

Just such an opportunity came in 2002, when Ralph assumed responsibility for AT&T wireless operations for 11 countries in South America, employing 15,000 people and serving 11,000,000 customers. This was a large, but unprofitable, business that needed to be turned around. The problem was that he took the helm at a moment of great political and economic upheaval in South America, in areas including Argentina, Venezuela and Brazil. “I viewed the region as full of opportunities because I strongly believe that opportunities are really problems in disguise, although I have to admit that the opportunities were very well disguised in Latin America,” Ralph admitted.

Ralph gathered the disparate 11 CEOs from each country for a meeting in Miami, FL. They stayed at that conference until they developed a plan to transform the situation, with each CEO signing a document to demonstrate their commitment to the plan. Despite all the obstacles, the business started producing a net positive income in the first year.

“When I get to a new assignment like this one, I have a process that I call the success cycle,” Ralph shared.

“Basically this means that the first thing I do is I assess the situation. Then I create the vision for the organization. I build a plan to achieve the vision. I align the people, and finally we execute, monitor and adjust.”

Aligning teams isn’t a simple task, but it requires one thing above all else, leadership. If you are ready to align your team and get them performing, The Maxwell Leadership’s private training and coaching services can help you and your executives do just that.  For more of Ralph de la Vega’s incredible story, be sure to check out Obstacles Welcome.