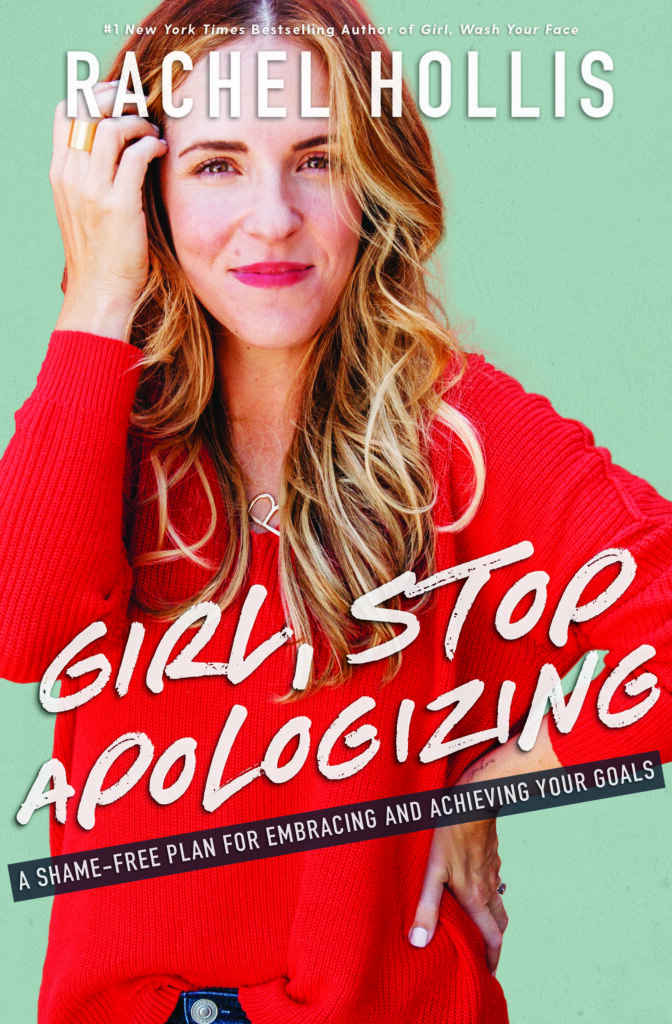 My friend Rachel Hollis released her new book, Girl, Stop Apologizing, last week, and it’s done amazingly well. Today, I want to share with you just a snippet from the book as an encouragement.

If you’d like to read all of Rachel’s book, you can visit http://www.girlstopapologizingbook.com to purchase your copy today!

You Need a Road Map

The first step toward achieving your goal is to know where you’re headed. The problem is that often people think that’s all they need to know. They forget one crucial piece of the puzzle: a map only works if you know both your end and your starting point. Said another way, you cannot get to where you want to go if you don’t know where you are.

How often do you set out on a road trip without a map or directions?

Because a map can get us there faster and more efficiently. Because when we see something from a ten- thousand- foot view, we’re able to plan for and anticipate things that might pop up along the way. It’s much harder to have any kind of real strategy when you’re on the road.

I have used this road-map strategy for every major work project or personal goal I’ve taken on over the last fifteen years. It’s not complicated—it only has three components. The trick is to approach these elements out of the usual order we expect them to be in.

See, we’re taught to start at one, then get to two, then end up at three. This is incredibly confusing if you don’t know what step two is. And how are you supposed to know what the steps are if you’ve never taken them before?

I’ve found that if I flip the order and start with the finish line, then contemplate where I’m starting from, I can more easily define the steps in the middle that will take me from one place to another.

First of all, you’ve got to start at the end. Counterintuitive, perhaps, but super effective in figuring out what direction your path should go. You should have one clear and defining objective, one goal you’re focused on right now. That’s where you start.

To give you an idea of exactly how I’ve used this road-map strategy, I’m going to share a personal goal of mine from the past. I wanted to have a cookbook. I was a food blogger at the time, and having a cookbook felt like the ultimate goal! That was my finish line. I figured out my very specific what by zeroing in on my very specific why. I wanted a product for my fans that would commemorate my family recipes and be a first product offering that was in line with my brand at the time.

Now that you know where you want to go, you need to practice some self- awareness and be really honest about where you’re starting from.

What assets, resources, and habits do you currently have that are going to help you with your journey? How can you expand on them and use them for exponential growth? What habits do you have that might derail you or push you off course? How can you be intentional in planning around those in advance so they don’t sneak up on you? What good habits could you develop to replace those negative ones?

My starting place for my cookbook was great. As a food blogger I knew photographers and designers and a food stylist to help me make it all look incredible. What I didn’t have was a literary agent or experience in the cookbook space. I was super honest with myself about what I did and didn’t have access to, and then I got to work!

For instance, how could I get a cookbook deal? At the time I had no idea, so I headed over to Google (I swear to you, the answer for literally everything exists on the internet for free), and I asked that exact question.

There were all kinds of answers, and I wrote down each and every one in a big idea soup— that’s what I call my written brainstorm sessions, because they always look like a big messy bowl of possibility. Anytime I’m creating a soup, my goal is to find at least twenty ideas for how I’m going to get there. I put down anything I can think of, and since it’s a brainstorm, I don’t debate whether the idea is good. I just write it down.

The problem with stopping at this soup (besides the fact that it’s overwhelming) is there are too many possible directions to head.

We want to create a clear direction, and this brainstorm page, while awesome, is likely to create a lot of stops and starts and unproductive attempts. So, in order to move forward, we’ve got to get it organized.

The question is, How do we do that? The answer is, surprisingly, with another question.

Look at your brainstorm and ask yourself, of all the ideas you’ve got there, what are the three major things that, if you actually achieved them, they would— without question— get you to your goal?

Getting from twenty ideas down to three might seem impossible, especially since so many of them would be helpful, but I’m convinced that if you force yourself to come up with only three, those three will be the guideposts you’ll need to get you back on track if you get lost along the way.

How do you choose your three? Go to your end goal and ask yourself, What is the step that comes just before this? Then choose two more guideposts working back from there.

The thing about a guidepost is that it’s something you cannot easily achieve without taking a bunch of other steps to get you there. People often hesitate to write these down, because they seem nearly as impossible as the dream itself.

For my publishing journey, my road map started to take form when I forced myself to come up with my three guideposts.

The very last step before getting a deal for publishing a cookbook is submitting a proposal to publishing houses: guidepost number three.

Okay, so what’s the step before that? Well, Google told me that in order to submit to a publishing house, I had to have a literary agent. No publisher will just blindly accept a manuscript off the street, so finding a literary agent became the second guidepost on my map.

Then I asked myself what I would need to secure a literary agent. There are so many ways to land one, but they all had one central thing in common: I’d need to create a proposal of some kind to explain what I wanted to do. That became the first guidepost in my road map.

I had a starting point and an ending point and three major guideposts on the way. Now I was able to figure out the how, or, as I like to call them, the mile markers. I had forced myself to come up with three major guideposts, but the mile markers can be numerous because these are all the little things, all the hows you’re going to need to figure out and do to get you to that next guidepost.

15 thoughts on "Rachel Hollis: You Need a Road Map"