Fear of failure is often the toughest hurdle to jump in leadership. In this episode, John Maxwell, Mark Cole, and Richard Chancy flip the idea of failure on its head.

Rather than allowing failure to slow down progress or even prevent us from starting in the first place, leaders can use the power of failure to “fail forward.” In this episode, you’ll learn four steps to fail forward.

Failure, as Richard points out, is the first step in starting a business. It’s the first step is starting most things. The people you lead are counting on your ability to turn failure into resilience, and it’s a requirement for your growth as a leader.

Our BONUS resource for this episode is the Redefining Failure Worksheet, which includes fill-in-the-blank notes from John’s teaching. You can download the worksheet by clicking “Download the Bonus Resource” below.

Developing the Leader Within You 2.0  by John C. Maxwell

Be the first to comment on "​Maxwell Leadership Podcast: Redefining Failure: 4 Steps to Failing Forward" 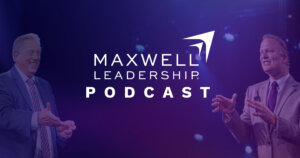 Maxwell Leadership Podcast: Get Intentional With Your Growth